Ski6, as I explained recently, was a rescue dog. And as such his actual date of birth is a bit hazy. When he came to us, almost 4 years ago, his age was said to be in the neighborhood of 1 1/2 or 2 years old. 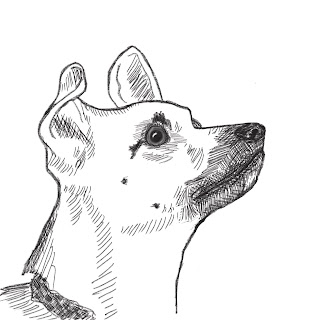 So that would make him about 6 years old today. We have always used the old traditional formula to translate dog years into human years, 1 dog year = 7 human years. That calculation would make Ski6 more-or-less equivalent to a 40 year old human. Just entering middle age and no longer the crazy teenager he was when we first got him.
But we have been noticing that the grey fur on his chin seems to have been spreading faster than we would expect. There was just a touch when he came to live with us four years ago, and it has spread all over his muzzle by now. Was he aging faster than a normal dog should? Few human males have grey beards by age 40. Did this premature aging relate to the injuries he sustained before he was rescued from a life on the street? Were we going to lose him long before his expected dog old age of 14 or 15 years?
A recent paper in the online scientific journal, 'Cell Systems,' provides an explanation and quiets our fears.
Graduate student Tina Wang wondered if dogs could be compared to humans in terms of a standard biological indicator of aging, DNA methylation (https://en.wikipedia.org/wiki/DNA_methylation#In_aging). Wang and a number of associates undertook a study to compare DNA methylation in dogs and humans. What they discovered is that a dog's age in human years is not simply 7 times its age in dog years. It is more like 16 x ln(age in dog years) + 31. Here's what that relationship shows: 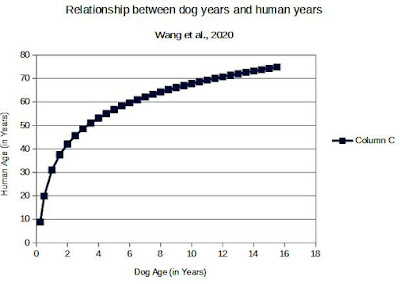 This means that our Ski6 is more like a human who is 60 years old than one who is 40. Gee, that explains a lot!
The best part about this new revelation is that although Ski6 has aged relatively rapidly during his first six years, the process will slow down a lot in the future. He's not likely to leave us prematurely. He can look forward to a full, dog old-age of 14 or 15, roughly equivalent to a human age of 75.
That's a relief.
Here's the scientific reference: Wang et al., 2020. Quantitative Translation of Dog-to-Human Aging by Conserved Remodeling of the DNA Methylome.